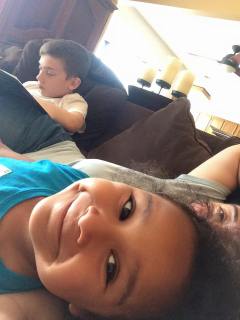 And so it begins…

People always worry that unschooling won’t prepare kids for the real world.  How will they learn (insert any number of skills here).  It’s a scary place to be for parents–especially since unschooled kids often don’t learn things when their classroom-schooled age-peers learn these things.  Suddenly, there’s an overwhelming fear that they’ll be “behind” and at a disadvantage that will render their children unable to support themselves in society.

And that’s a really valid fear when you consider that we don’t have a lot of open role models who have been unschooled.  But let’s break it down and analyze it.

I wrote a great response to this in a post that has since been deleted, so I’m going to try to go from memory… bear with me and comment with any questions that remain so we can discuss!

The biggest fear parents seem to have is that their kids won’t have the skills they need to be “successful” in life.  The question begs to be asked: what do you mean by “successful”?  For most parents, this means going to a good college and entering into the white-collar workforce.  My experience has been that unschoolers are given far more freedom than this, and are given much broader terms of “success”.  Most unschooling parents I know will define success as: their kids doing something they don’t hate in a legal manner that allows their child (and child’s future family) to be self-supporting.

Guess what?  That’s not always going to mean college and/or a white collar career.

Sit with that for a moment…

If your child was working at something that made them at least as happy as you are at your job and could support themselves and their family in a legal manner–would that be okay for you?  What if that meant they drove a garbage truck?  Or they became a plumber? And what if your child did either of these and was a girl (since these jobs are traditionally associated with boys)?  How much of YOUR comfort level facing society is wrapped up in what you want for your children?

If you’ve overcome that obstacle, the rest becomes much easier.  Suddenly, the end-goal doesn’t seem impossible because it’s not a clearly defined thing.  Some people find this even MORE overwhelming.  It feels like chaos and confusion… what DO you do?  Certainly it’s a lot of freedom that most of us haven’t been raised to harness or manage well.  We’ve been ingrained to meet someone else’s standard rather than create and live by our own standards.

So… when do they learn math?  I think that’s the first question people ask.  And the response is generally the same for all things: when they want to.

It takes far less time to learn math than people believe.  It’s hard to imagine that a child with no formal math instruction could pick up an algebra readiness test and nail it at age 12 or 13 and yet it happens.  Because algebra is more about problem solving than higher level math.  My own son took the Iowa Algebra Aptitude Test without ever having formally learned fractions and without his math facts memorized.  He’s not an anomaly.

It’s also hard to imagine that a child could ever WANT to learn math… because it was pushed on us usually at developmentally inappropriate ages and often not in our preferred learning style for math (which can be different than your preferred learning style for all other topics).  Math is a very personal thing.  You need to be able to integrate the concepts into your life in ways that you understand them.  I venture to say the majority of you reading did not get that.  Teachers can explain things best in THEIR terms.  What makes a great public school teacher is the ability to translate complex topics into terms that the majority can grasp and comprehend.  But by and large, people explain things the way THEY understand them.  We are a good 2 generations into a culture that largely believes they suck at math.  My own brother SWORE he was horrible at math.  He would get EXTREMELY angry with me for insisting that it wasn’t him–it was the teachers he had (we had different teachers).  He thought I was good at math and therefore just assumed everyone could be good at math and therefore I was dismissing and ignoring his very real struggle and possibly his individual differences despite our shared biology.  I understood math well and I knew my brother was extremely bright in ways you need for higher level math.  He would never believe that because #Imthestupidandoverbearingoldersister.

My brother finally had to go back to college and do some math… which of course, he bombed.  Until he hired a tutor.  The tutor was able to translate the concepts into terms my brother understood and … *poof*… suddenly he didn’t completely suck at math.  I was simultaneously happy for him to have that wall broken down in his life; and hoped that it restored some level of faith that I wasn’t dismissing him as a person.  I think he assumed that the latter was luck and coincidence rather than knowledge.

But when a builds a foundation of math through their daily lives (it’s true!  It happens!) and  their nature inquiry–there’s no ingrained sense of inability.  They don’t come to it believing it’s hard or that they can’t do it.  And they are usually driven to learn it because it’s required for some greater goal.  This is another concept we have culturally been led to believe doesn’t exist in children: the greater goal.  When my friend asked me what to teach her children (ages 5 and 7) I told her to ask them.  There was shocked pause at the idea that the kids could tell US what they wanted to learn.  “Will that be ENOUGH?”  Actually, it will probably be way more than they’d learn at school and they’d actually REMEMBER all of it.

When someone is struggling to impose academics on a 9yo, I advise them to sit that 9yo down and ask them what they want to be when they grow up.  I tell them to pick 1-3 possible things they might want to be.  This is often met with a few responses:

First of all, most kids have an idea of what they want to be when they grow up.  They might not verbalize it if they feel it will be dismissed or scorned.  Yes, they might think they want to be a video gamer.  Why is that a problem for them to have these dreams at this age?  And last, they don’t need to know all the possible jobs out there.  They need to have their own ideas.

Once they’ve made their choice (or list), you have a discussion about what they need to know in order to do those jobs, and you go from there.  Will you use curriculum?  Maybe.  Maybe not.  That’s really going to depend on what your child wants to know and how they want to learn it.  How THEY want to learn it.  If you have younger children, please be mindful that they are going to model after your behavior.  If you behave such that you are excited about curriculum and classes, they’re going to want to “be with you in a happy state” and they will try to come to love and want those things, too.  All children do this, but with younger children it can be a bigger challenge because they haven’t yet come to learn to advocate for themselves the way older kids advocate for their interests.

This is the path we took with BigGuy.   I sat him down and asked him what he wanted to learn.  He wanted to learn more about Minecraft.  He wanted to be a Mojang programmer.  PEOPLE.  MINECRAFT IS THE BANE OF MY EXISTENCE.  It was seriously NOT a shock that these were his answers.  So I asked him what he would need to know to do that and the list grew from there.  Shockingly, he came up with a need to learn history (which is the Least Loved Subject in my house) as part of his grand scheme.  Wow.  You haven’t met my BigGuy so you cannot appreciate the shock that accompanies “BigGuy having goals”.   I had never asked.  I used this approach with a friend whose children are much younger as well (see this blog post).  Come to find out that my own 6yo has goals, too.  Who knew?

Regardless, we don’t really fight about BigGuy’s learning.  He will occasionally not want to do something and I will remind him of how it relates to his goals.  He can then choose to go back to doing what he was complaining about, or he might decide that he doesn’t need to learn it RIGHT NOW.  If it’s related to a class that he wanted and I paid for (he knows how much the classes cost going into it as part of weighing it’s value), then he has the choice to stop if he’s going to pay me back the cost of the course.  I say that having a kid that can make money mowing lawns and most years, he gets an allowance every week.  So although one course might wipe out his stored up funds, it’s there and he knows it.

BigGuy just learned a lot this week.  He has several classes between in-person and online and they are heaviest on Wednesday and Friday.  He also has choir and public speaking club.  Well, last week we missed most of our Wednesday classes because BigGuy hadn’t done the work for the week.  It was clear we needed to lay out a schedule… so we did.  That’s going to become it’s own blog post.

The point is that he learns a lot through these experiences; and when you understand what goes into doing any number of these tasks, you realize that kids are learning a lot more than we give them credit for without the imposition.  It doesn’t happen on the school’s timeline, but not making their deadline doesn’t equate to “they’re never going to learn it”.  Education research discovers new things all the time and schools cannot change in step with that research to address the best needs of kids.  There is much arguing about when it’s developmentally appropriate to do this or that, or what order to teach things.  My own district couldn’t deny that the order in which we teach math subjects isn’t prerequisite to calculus–it’s done with the assumption that not all kids will ever take calculus.  The progression of high school math used to be Algebra 1, Geometry, then Algebra 2.  We are now watching people take Algebra 1 and then Algebra 2 because they’re finding it easier.

The schools and the education system don’t have the magic answers to creating a successful career and life.  When you sit and really dig into everything, it’s less scary.  And the kids learn.