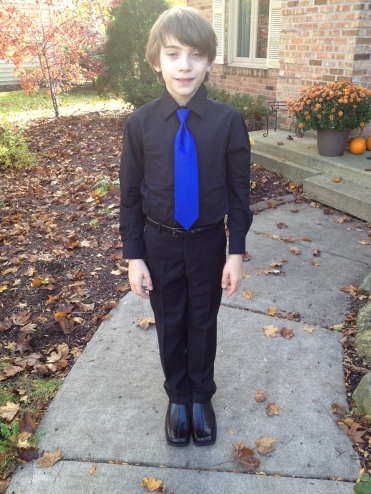 Last night, our BigGuy went off to his second performance with his boys choir; and his first in full regalia.   I broke down and got his hair cut so he didn’t ACTUALLY look like that.  I don’t care what other people think of his hair.  It causes me physical eyestrain pain to see it hang in his eyes.  Nobody’s ever said anything about his long hair (and dude–it’s been WAY longer than this.  I’m not sure how I got through this stage when he grew it longer).

But my son’s choir sang with the American Boychoir (which is like the United States version of the Vienna Boys Choir).  It was such an honor!  These boys travel the world to sing–it’s amazing.  We hosted two of the boys overnight and they had some amazing memories.  One of the boys–an 8th grader in his last year of American Boychoir–said that these have been some of the best years of his life.  I wonder if he’s right.  I thought about that–to have “topped out” on adventure at 8th grade.  Unlikely, but what if that’s his life’s path?  How amazing to have had those experiences…

The American Boychoir was remarkable and at the midway point of the performance, our boys took the stage.  I sat there wondering how they would compare, wondering if they would pale in comparison.  Then they hit their first harmonized section of “The Lord Is My Shephard” and I got goosebumps.  They completely held their own and were absolutely awesome!  I was so proud!!!  I couldn’t believe it!

I was equally proud of BigGuy’s ability to focus better on stage this time.  Last weekend, he was part of a larger event that included multiple boys and mens choirs and choruses including a local college group.  Boys from the community who were interested in singing were also invited.  For BigGuy, the boys in his choir had to wear their choir t-shirt, but could wear jeans.  It was a full morning of instruction and then a 30-minute performance of the various groups.

It was painful to watch.  Not the music.  BigGuy’s behavior.  Honestly and truly, I was so ready to be done with choir at that point.  In retrospect, I realize that 1) it was his first time in this situation; 2) it was a LOT of kids he didn’t know (read: wicked social anxiety); 3) he’d had pizza for dinner the night before, and then they served pizza (and a rice crispy treat) for lunch before the performance.  Holy blood sugar and food intolerances, Batman!  Pizza wouldn’t have been a problem on it’s own, but I forgot he’d had it the night before and I didn’t know about the rice crispy treat.  Oh my.   4) They were under very bright lights (read: let’s compound the blood sugar problems).  I can come up with a couple more, but this is enough–you get the picture.  He was totally “that kid”.  Ugh… and this after already having a phone conversation with the choir director, who was “looking for some input on managing BigGuy’s behavior” during choir rehearsal.

Needless to say, I wasn’t basking in the complete joy of the event like BigGuy was.  He was floating.  I’d given him some feedback afterward on the way home.  Husbeau and I disagree about how to handle this sometimes.  We homeschool BigGuy partly to allow him to develop emotionally without being made to feel like his just being himself is “wrong”.  So when I was more focused on what went wrong than BigGuy’s complete joy at participating in the event, both Husbeau and BigGuy were less than thrilled.  At the same time, he can’t be sheltered from the realities of his behavior.   I handled it as gently as possible, but as directly as possible.  That was a tough one.  Ultimately, I had to ask BigGuy which he would prefer:  that I not give him this feedback and allow him to potentially get removed from choir?  Or to give him this feedback and help him find ways to overcome the problems so he could remain in choir?  He chose the latter.  I felt awful, but it needed to be done.

We talked about the hows and whys of the behaviors he exhibited being a problem.  We brainstormed for the things he couldn’t overcome with simple knowledge.  We reminded him that his choir director didn’t remove him for his problem behaviors in choir rehearsal–he reached out to find ways to help BigGuy stay in choir.  But ultimately, the director has a LOT more to manage than just our BigGuy’s behavior.

That conversation clearly paid off because BigGuy was wonderful on stage last night!  He was less fidgety, more focused and his director said that he behaved really well during the times they had to sit through the performance.  The director agreed that this was a notable improvement for our BigGuy.

Wow am I relieved.  Seriously.  I’m also really excited for my BigGuy because he really loves singing.  He also made some friends in the boys that stayed with us overnight.  They were so kind!  It was a great evening!